This is the latest version of @TroveNewsBot which includes a number of new or enhanced features: 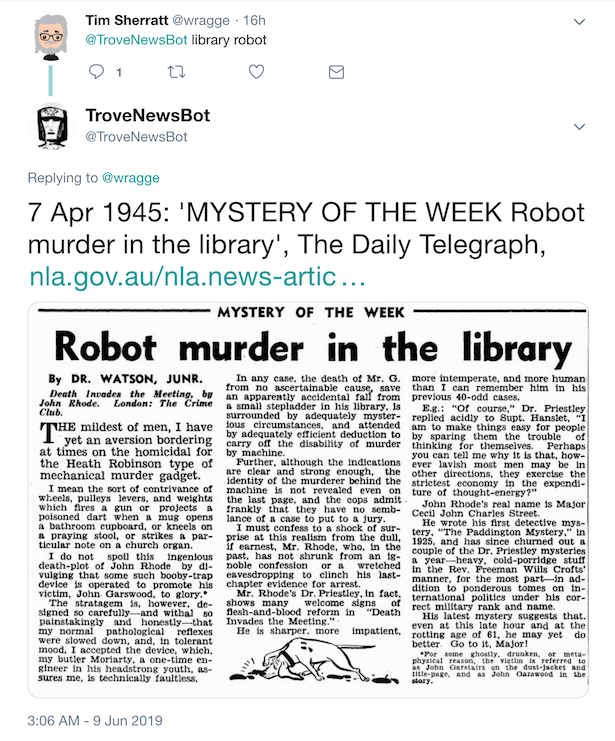 For an earlier incarnation of TroveNewsBot see this repository.

Ever wanted to search Trove’s newspapers without leaving Twitter? @TroveNewsBot can help! Simply tweet your search terms at @TroveNewsbot and it will search Trove for you, tweeting back the most relevant result. It can be as simple as this:

Here’s an example of a tweeted query and @TroveNewsBot’s response. Note that ‘@TroveNewsBot’ has to appear first in your tweet (this is to stop the bot responding every time it gets a mention!).

By default, @TroveNewsBot tweets back the most relevant result (as defined by Trove’s relevance ranking). But you can change this by adding one of the following hashtags to your tweet:

You can filter your results by using the following hashtags:

Note that if you use the #illustrated hashtag, @TroveNewsBot will use the first illustration it finds in the selected article as the thumnail, rather than the article’s headline.

If you include multiple search terms, @TroveNewsBot will look for articles that contain all the terms (an ‘AND’ search). If you want to change this, you can add the following hashtag:

You can can combine any of the hashtags described above to make more complex searches. For example:

But what if don’t have a particular search term in mind? What if you just want to explore? @TroveNewsBot can help with that as well! Simply tweet #luckydip at @TroveNewsBot for a randomly selected newspaper article. If you want slightly less random results, you can add any of the filters describe above. For example:

Behind the scenes, @TroveNewsBot randomly selects a random option to find your random article. The options are:

Note that this is something you can’t do through the Trove web interface. Bots FTW!

Instead of feeding search terms to @TroveNewsBot, you can send it a complete web page! Just tweet a url at @TroveNewsBot and it will automatically extract keywords from the page and use them to search Trove. You can limit the results using the filters described above. For example:

While you could add #luckydip to this search, you’re not likely to get a very useful result. That’s because @TroveNewsBot searches for articles containing any of the keywords it extracts. Trove’s relevance ranking will push articles that match mutiple keywords to the top of the results, but a random result might only match a single keyword. But hey, if you’re feeling adventurous give it a go!

@TroveNewsBot’s tweets include a specially-generated thumbnail image of the newspaper article. To get these sorts of images from the Trove web interface you have to fiddle around with screen captures or PDFs. But again, @TroveNewsBot can help! If you already know the article you want, just tweet its identifier (that’s the number in the article’s url) and add the #id hashtag. For example, here’s the url of a newspaper article in Trove:

The article identifier is 162833980, so to get the article from @TroveNewsBot, just tweet:

If the article has an illustration and you’d like the illustration used as the thumbnail image rather than the headline, just add #illustrated:

Here’s the results without and with the #illustrated hashtag. Obviously, if the article doesn’t have an illustration, adding #illustrated will have no effect!

Once @TroveNewsBot has responded with your nicely-presented article reference, you can save the thumbnail, or quote tweet the result. It’s an easy way of sharing a social media friendly version of a Trove newspaper article.

@TroveNewsBot uses the following libraries (amongst others):

If you’d like to know more about how @TroveNewsBot generates the article thumbnails, look at the examples in the Trove Newspapers section of the GLAM Workbench.

If you like this project, you can support it on Patreon.